On the Wednesday morning after Sweden football triumph we’ve decided to have a breakfast in our hotel. We had a big decision to make: where to go.

Several scenarios were put up to the vote.

I’ve talked Jonas into voting in favour of scenario B. It sounded the most reasonable: this way we would be able to get a good rest and show our speedos in Jurmala before Friday night in Riga. Johan was busy with the backgammon app on his phone, so he was considered as abstained.

So, we had 100 km to make to Saldus. The country between us and Saldus seemed to be designed mostly for drivers and wasn’t filled up with cosy small towns and lunch amusements for tired bikers.

But the majority has spoken, so we started riding with the strong feeling of “We’ll sort it out on the way somehow”.

It was a great day. The road was so much better than we’ve expected: the asphalt was freshly baked and the traffic was not heavy at all. Sun, wind and scenery — what more to ask? Well, wind could be favourable, sun not so hot, and scenery a bit less hilly.

I started to fall behind on every uphill. Johan and Jonas have noticed my struggle, so we’ve stopped by a bus stop in the middle of nowhere.

My battle buddies treated me with the liquorice power bar — the last we had — and shared their last drops of water. The power bar was a lifesaver! Thanks god no one was into liquorice so it survived up to the moment.

We expected to have our supplies restocked in 30 km at some place called Skrunda. Before that we were empty. But the morale was strong — and that’s what matters.

The small city of Skrunda treated us as if we were lost sons: super-friendly lady at a road house buffet, huge portions, unnoticeable price. After 70 km without a lunch it felt like Christmas. I was so relieved I forgot to take a photo. My bad.

[It should be a Skrunda Oasis photo here. Sorry, don’t have it.]

We’ve replenished our resources, went back on the road and for a while 30 km left to Saldus seemed almost too easy. But for me it wasn’t.

The last 300 meters of a ride turned out to be the steepest uphill we’ve had so far. “Why oh why? What have I done?” — was the only thing I was able to cry; while Swedes were cycling by me as if the road was flat. Those athletes!

One way or another, finally we were in Saldus.

I was dead. Guys were talking about some bar-hopping, city-watching, having a dinner, but all I was able to do was groaning.

Did you know swearing helps with the pain? It’s science! So, hot shower and 30 minutes of swearing did the job. I was better. Way better.

The reception girl didn’t speak neither Russian nor English, but somehow Jonas made her understand: we are looking for a bar.

5 minutes later we were in for our first beer in Saldus — out of many.

Unfortunately, the Velve bar wasn’t equipped with a kitchen. Or a ventilation system. Fortunately, the local beer they served turned out to be the best beer on our way so far.

So we made our first round a quick one, promised the barkeeper we’ll be back later and went out in search of a proper restaurant.


We made a couple of circles around the city, passed the main square with nicer buildings and wi-fi (!) benches. No restaurants or cafeterias. One pizza place without a terrace. One burger place (no terrace). One supermarket (no terrace as well).

So, we took a Power Bikers stance and came up with a brilliant solution.

Why sit inside a boring burger joint while we could fix ourselves with top-notch snacks and beer from the supermarket — and make it a picnic on the main square?

And so we did.

We got 6 or 7 (or maybe 8, or 9) varieties of pretty much the same beer, several packs of prosciutto and chorizo, and plastic glasses to drink with style. 1,5 kilo of prunus avium a.k.a. sweet cherry a.k.a. chereshnya went as a healthy dessert and also a eye-hand coordination trainer. 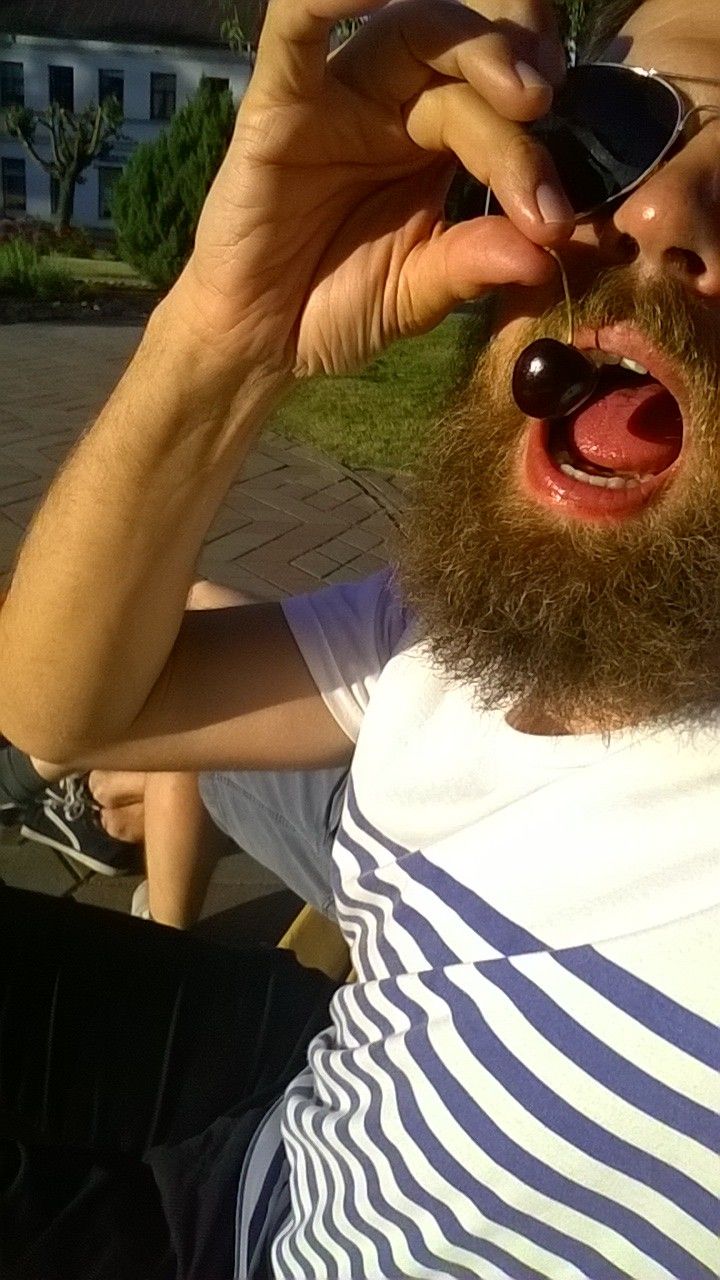 It went superb. We outstayed our competitors — a gang of local boys on the better wi-fi bench — and caught the last hours of sun. Boys looked cool with skateboards and beer, but Johan discovered their beer was non-alcoholic. Ha!

We talked a lot, kept an eye-contact, and barely used the public wi-fi (only to check on some facts to make our points stronger). We even discussed the nature of love. That’s what you call a proper dinner with a conversation. 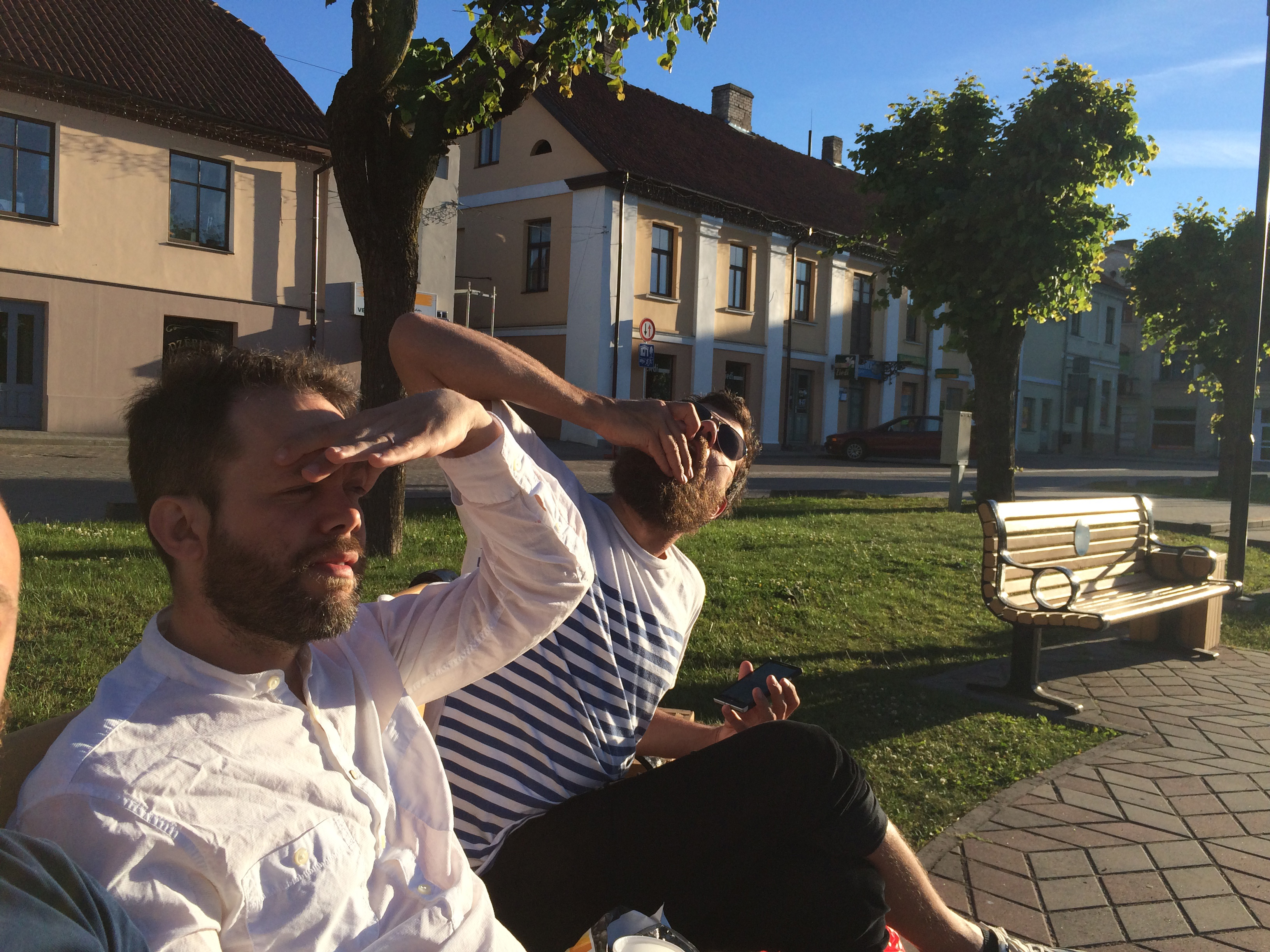 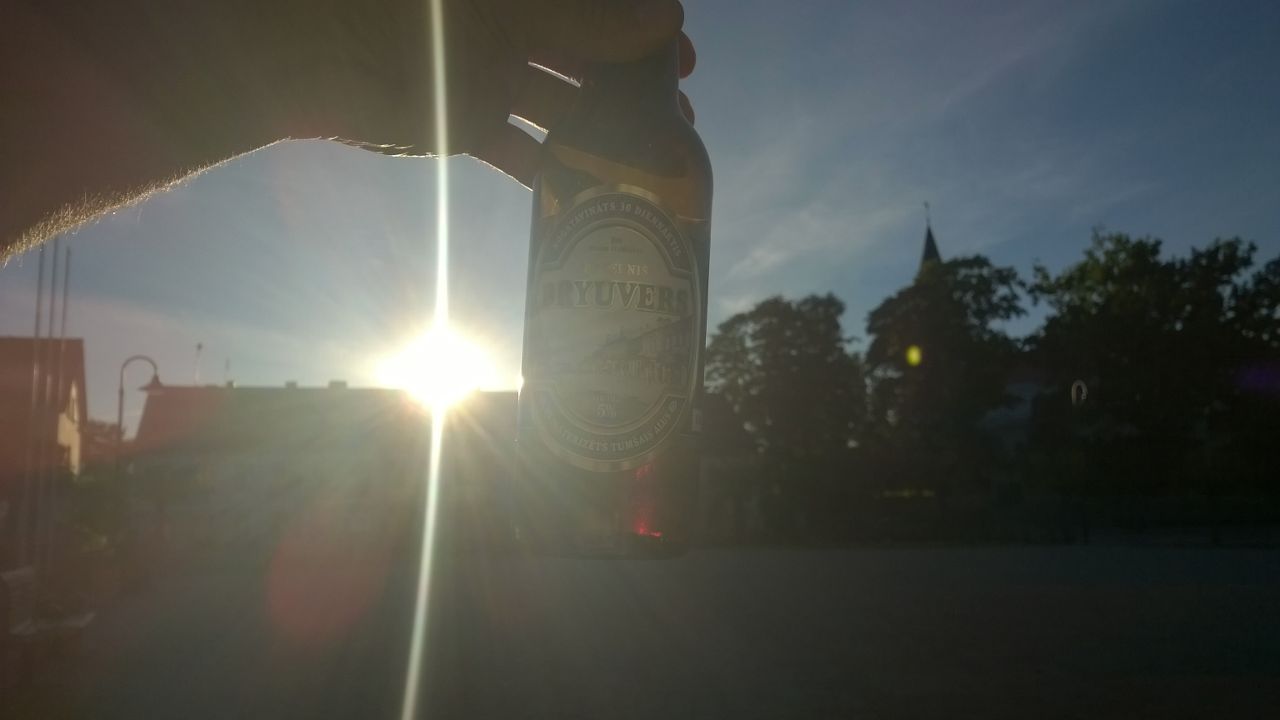 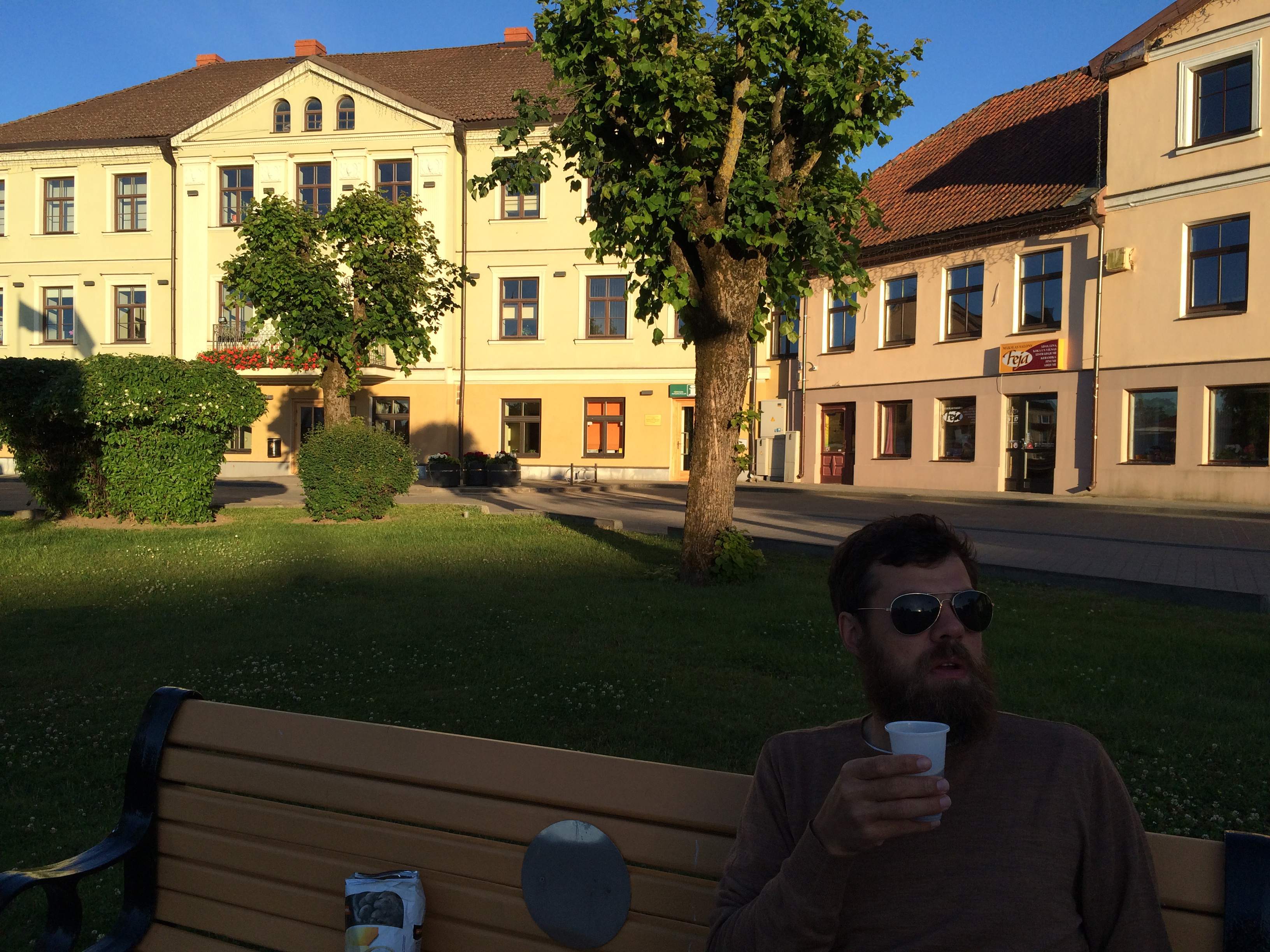 If you follow this blog you probably know: we are not the type that easily abandon people that put trust in us.

Bartender at Velve Bar should have been waiting for hours for us to return. We had a promise to keep. So, staggering a bit, but with much resolve, we headed back to the bar.

We had 3 more beers there. Each. I guess… After a while we were the only customers in the bar. When the bartender started to check the big wall clock again and again, I knew we have established a sort of connection. So we asked to make the background Queen’s Bests Hits 2CD louder and sang our lungs off. What a night. 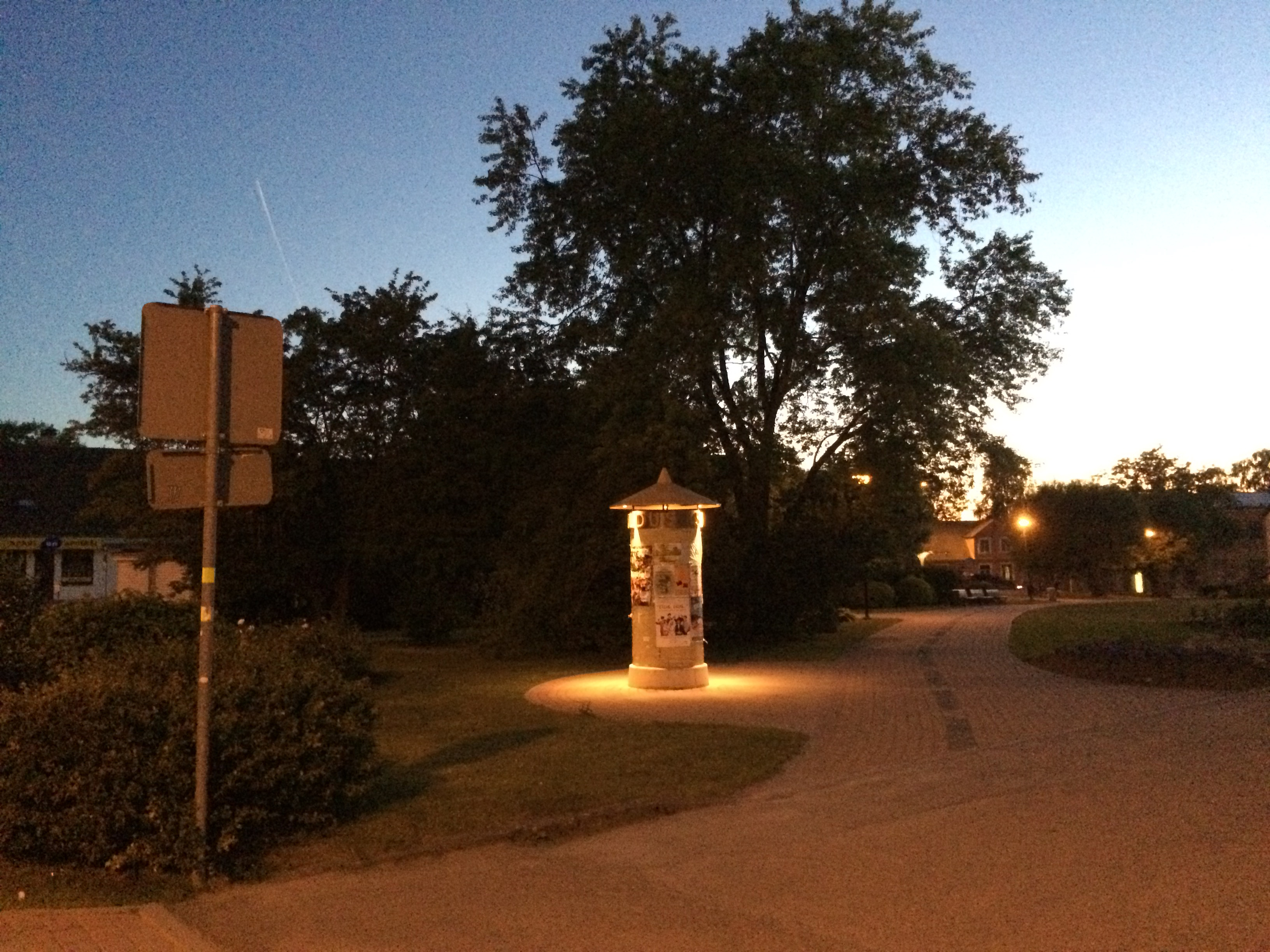 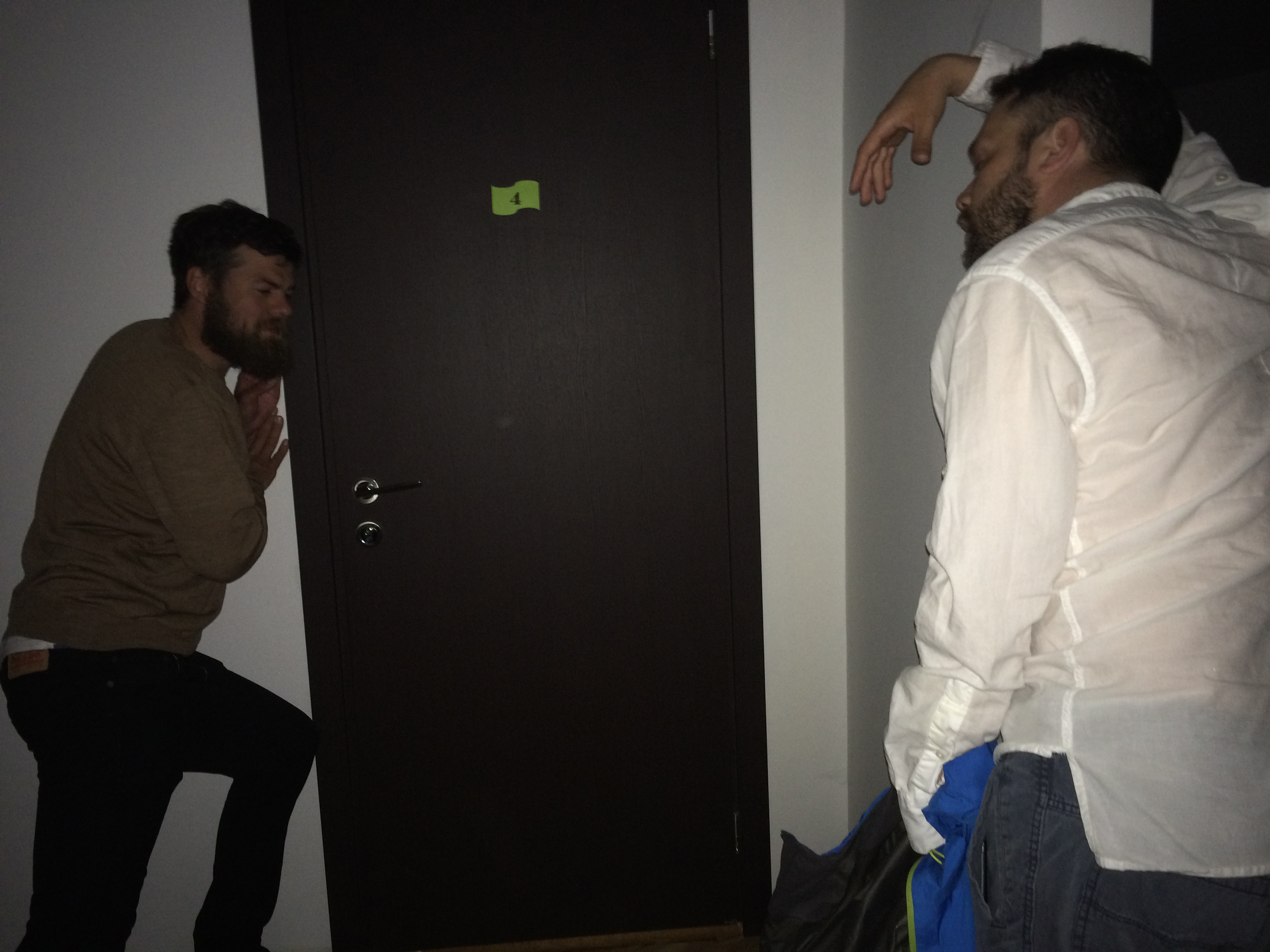 Next day was supposed to be the longest ride in our journey: 110 km to Jurmala.

Or have we decided to go back to Kaliningrad in the bar? Sounds plausible!